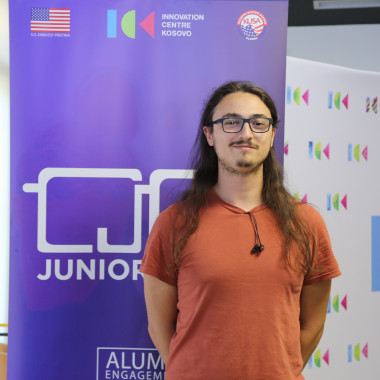 What happens when you mix an engineering mastermind, a pathological need for creation, a passion for fueling taste-buds with the most delicious nutrients, and an obsession with anything competitive? You get Lekë Sahatqija, a humble hero of Kosovo's game development history. Lekë's journey into the wild lands of the professional world began in the early Autumn of 2011, where he'd spend most of his days upgrading his French wiles mastering this beautiful tongue, whilst masterfully using it to conquer INSA's Lyon Telecommunications Engineering programme, where he earned his Master's badge of honor in 2016. Little did Lekë know, deep in the exchanges of his overcharged neurons, the roots of a passion planted in his young childhood began to sprout viciously. It all started with the two-year-old brainiac shuffling through his father's Game Magazines, when he entered the world of Classic Doom - and life, as he was to know it, would forever change.
The world would know the effects of this implosion of passion for the first time through the unpredictable and challenging world of PizzaTales. How it came to be is a story of another time, born out of god-like inspiration amid the truest of brotherhoods established. T'was a sign from another era, another world, perhaps a parallel universe where the world succumbed to desperation, that Lekë must return to his home-country and help lay down the game's industry foundation with his bare, nimble fingers of pure, electrified power. He donned his cap, let down his hair, and planted the flag of his company, Blackout Softworks l.l.c., in the middle of Prishtina in 2018. Soon after, the sprouts of the gaming community gravitated towards him, as natural as if it were destiny, created Kosovo's Game Developers Community. To this day, he continues to contribute in local Game Jams and community events, pushing forth the industry with all his might and fury. His word and voice is heard across the lands and seas, in Western Iowa Tech, where he humbly guides young-un's on the path to greatness and creation.