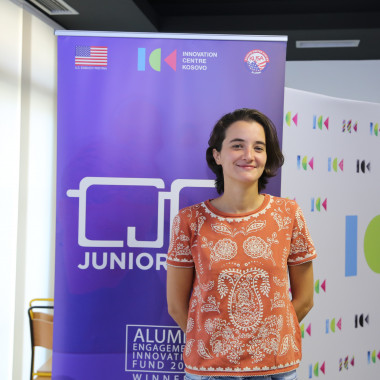 In the beginning there was nothing. An eternal reign of darkness. Then, came the first video game. Then, some eons later came the first Half Life, and an 8 years young Agnesa Belegu was so positively mesmerized by it that she decided, even at such a young age, to dedicate her life to the act of creation of such works of impeccable art.

The first step in this marvelous journey was getting a computer science degree at UBT. One must master the tools of the craft after all. Next was a Game Design degree at the Florida Interactive Entertainment Academy, which itself led to a game designer position at EA Sports. Yes, THAT EA Sports!

But she did not forget her home, and came back to establish the first professional game development team in Kosovo at Zombie Soup, and was instrumental in helping the Kosovar Game Development industry get started through her sublime community work.

Today, Agnesa is the lead designer on a "little" game called Dying Light but her immense influence in Kosovo lives on in the Kosovo Game Developers community.